On the morning of Thursday, 20th November 1980, a Wilson Brothers Corp. rig was drilling for Texaco in Lake Peigneur, Louisiana, which had an average water depth of 6 feet. Around 0430 hours Thursday morning, the drilling assembly became stuck around 1228 ft and could not be freed by jarring or working the pipe. By 0630, the drilling rig began to tilt so the crew abandoned the rig and headed for the shore due to fears that the rig was on unstable ground. Over the following hours, the crew and nearby residents watched in shock as the drilling rig collapsed and disappeared into the shallow lake. 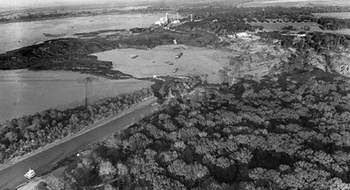 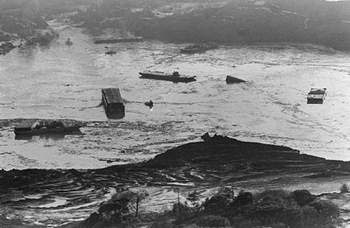 Barges being drawn into the vortex 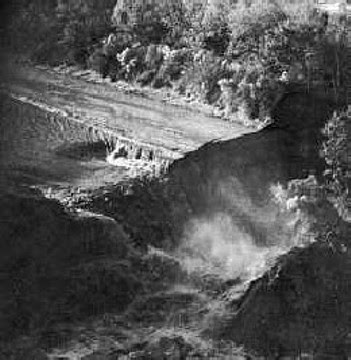 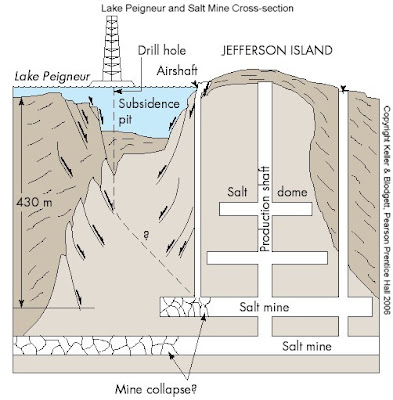 The rig crew had been drilling a test well into deposits alongside a salt dome under Lake Peigneur. By some miscalculation, the assembly drilled into the third level of the nearby Diamond Crystal Salt Mine. The initial consequence was the stuck pipe, but fresh water from the lake soon began trickling into the salt mine. Over the course of the morning, the fresh lake water began dissolving the salt and enlarging the hole until water was literally flooding into the mine.

The mine itself consisted of a number of levels up to 1500 feet below the surface, with each tunnel around 100 feet wide and 80 feet high. Pillars of salt, which were left in place to support the ceiling of each level, were dissolved away by the fresh lake water causing the collapse of the salt above the mine. As the bottom of the lake fell away creating a vast sinkhole, a witness stated, "there was a huge noise like compressed air coming out of the mine. It was because the water was going into the mine faster than the air could get out. It created a geyser that went up 400 feet - spraying water and debris into the air." Fortunately, the men working in the mine managed to evacuate early with no loss of life, thanks in part to the early warnings of some of the mine employees.

The sinkhole grew so rapidly that a 50 foot waterfall formed where the Delcambre Canal reversed direction and flowed back into the newly formed crater. A large whirlpool formed in the lake, sucking down a second drilling rig, 11 barges and a tugboat. The tugboat at full throttle was unable to overcome the strong flow dragging it backwards down the canal into the sinkhole. After two days and an estimated 3.5 billion gallons of water draining in from the Gulf of Mexico, the lake refilled and stabilised. The lake that was once around 6 feet deep was now around 1300 feet deep, with the ecosystem radically altered by increased salt content.